Conception and planning of safety systems

In many buildings, for example hospitals, schools or public institutions, hundreds of people are present during certain periods of time, either working there or as visitors or guests.
If many people gather in a confined space, there is an acute danger to life in the event of a catastrophic event, such as a fire, a hurricane or even a terrorist attack. Safety technology systems warn or combat the dangers. This saves human lives and limits material damage.

Which equipment is part of safety technology?

In the field of technical building equipment, all building services equipment that serves to increase building security is referred to as security technology. Many of these are electronic systems that work with low current (voltage below 24 volts). Safety technology systems include, for example: 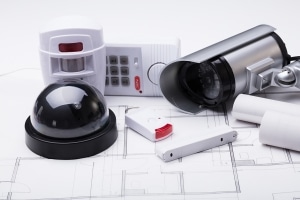 These systems work with low current. They belong to the category of hazard alarm systems. Video surveillance systems fulfil several tasks. They serve to protect people and facilities in the building by reporting burglaries, robberies, fire or acts of vandalism.
In most cases, several cameras are used, whose signals converge in a control room or security centre and are recorded there. Private video surveillance has been regulated in Germany since 2010 by Section 9a of the Data Protection Act and may only be used under certain conditions. Reference must be made to video surveillance. Recordings must be deleted after 72 hours at the latest.

Many of the catastrophes described at the beginning of this article result in a total or at least partial power failure. That is why safety lighting, also known as emergency lighting, is an indispensable part of safety technology. It works with weak current, independent of normal lighting and is usually powered by batteries or emergency generators. On the one hand, safety lighting makes it easier to evacuate people from the building, and on the other hand, it makes it easier for the emergency services to find their way around during rescue operations or when fighting a disaster.

They also belong to the category of hazard detection systems and are supplied with low current from an independent power source so that burglars cannot deactivate them simply by interrupting the power supply. Depending on their design, intrusion detection systems can trigger various actions. For example, the alarm can be forwarded to an internal security centre or control room and the security service or property protection department can take action or the police can be alerted directly.
As a deterrent to criminals and to warn people in the building, an acoustic and optical alarm can also be triggered on site. Similar to fire alarm systems, burglar alarm systems also work with sensors (glass breakage sensors, motion detectors) which, when activated, forward the alarm to a central system.

What should you pay attention to in safety technology?

Safety technology systems are subject to strict legal regulations. In many special buildings such as clinics, schools or retirement homes their installation is mandatory. Installation, maintenance and inspection may only be carried out by qualified persons.

As a rule, the work carried out must be documented. Smaller companies that do not have suitable personnel for this can entrust the installation, maintenance and inspection of the safety technology to companies such as engineering and expert offices that are specialised in this and have the necessary competence. Better safe than sorry! This is what an English proverb says.

To ensure that the safety technology of your project works perfectly, simply ask us for our advice. We like to assist you!
Contact
Scroll to top

We may request cookies to be set on your device. We use cookies to let us know when you visit our websites, how you interact with us, to enrich your user experience, and to customize your relationship with our website.

Click on the different category headings to find out more. You can also change some of your preferences. Note that blocking some types of cookies may impact your experience on our websites and the services we are able to offer.

These cookies are strictly necessary to provide you with services available through our website and to use some of its features.

Because these cookies are strictly necessary to deliver the website, refuseing them will have impact how our site functions. You always can block or delete cookies by changing your browser settings and force blocking all cookies on this website. But this will always prompt you to accept/refuse cookies when revisiting our site.

We fully respect if you want to refuse cookies but to avoid asking you again and again kindly allow us to store a cookie for that. You are free to opt out any time or opt in for other cookies to get a better experience. If you refuse cookies we will remove all set cookies in our domain.

We provide you with a list of stored cookies on your computer in our domain so you can check what we stored. Due to security reasons we are not able to show or modify cookies from other domains. You can check these in your browser security settings.

We also use different external services like Google Webfonts, Google Maps, and external Video providers. Since these providers may collect personal data like your IP address we allow you to block them here. Please be aware that this might heavily reduce the functionality and appearance of our site. Changes will take effect once you reload the page.